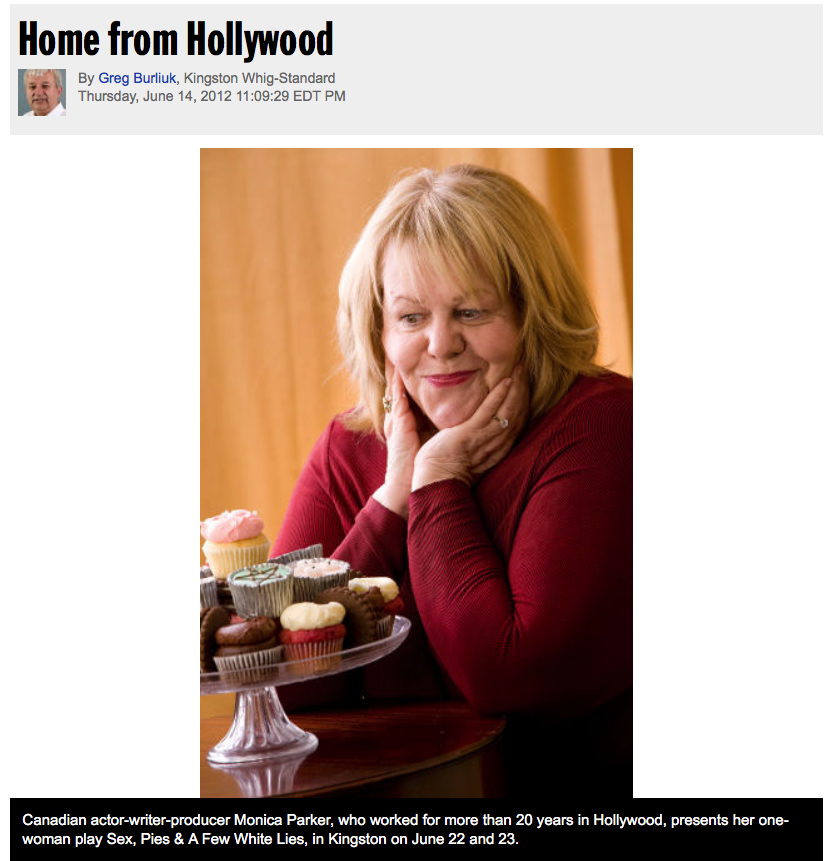 “I’d like to keep those people as friends,” says the straight-talking Parker, who moved back to Canada a few years ago. “The only famous people I mention are those I don’t know like Nicole Kidman and Michelle Pfeiffer and all I say about them is that they’re perfect.”
Parker tackled a higher mission than gossip for her show. She might even joke that it was a weightier one.
​
“I’m fat and I’m pissed off.”
She also later states that it took “101 humiliations for me to become who I am today.” That person is a happy one, and happily married at that. “We are all evolutions in progress,” says Parker. “At a certain point, you either make peace with who you are or spend the rest of your life in misery.
“When I was young, I was a fat kid who wanted to be popular. When the ‘in’ crowd didn’t take me in, I started my own crowd, who were a lot more interesting.”
Parker was a dress designer in Toronto when one of her customers told her she was funny. The next thing she knew she was playing a small part as a hooker in a film. From there, she began hosting an exercise show on City-TV.
“Dan Aykroyd did voiceovers for it and Gilda Radner would come on, too,” says Parker, speaking of two Second City alumni who would go on to fame as members of the original Saturday Night Live crew.
The exercise show landed her work in Los Angeles, where to Parker’s surprise she would work for some 24 years.
“I became an actress and then a producer and a writer,” she says.
Among the films she acted in were the 1998 thriller A Perfect Murder with Michael Douglas and Gwyneth Paltrow and The Road To Wellville in 1994, which starred Anthony Hopkins, Bridget Fonda and Matthew Broderick. Parker is equally proud of some of her producing projects. They include the 2003 TV movie Hunger Point about anorexia, and the self-explanatory 2007 feature The Party Never Stops: Diary of A Binge Drinker.
Parker came back to Canada because both her parents and those of her husband Gilles Savard had aging parents here.
“I always said I’d never get old in LA because they don’t really let you,” she says. “Canada is in my heart and here you can really stay grounded. No one let’s you get fancy.”
The premiere of Sex, Pies & A Few White Lies came two years ago at the Pilot Tavern in Yorkville and the play has since been performed in Newfoundland, California and soon in Scotland. The show is coming to Kingston because awhile back she was performing at an International Women’s Day Conference in Mexico when she meet some women from eastern Ontario. They persuaded her to come here and perform it.
Just why did she write the play? “I am a performer and a writer and I’ve probably been writing it all my life,” says Parker. “I have a lot to say but I wanted to do it in a way that was relatable and funny.”
Essentials
Who: Canadian actor-writer-producer Monica Parker, who worked for more than 20 years in Hollywood, presents her one-woman play Sex, Pies & A Few White Lies.
Where: Octave Theatre, 711 Dalton Ave.
When: Friday, June 22 and Saturday, June 23 at 8 p.m.
Tickets: $35.
greg.burliuk@sunmedia.ca
twitter.com/GregBurliuk 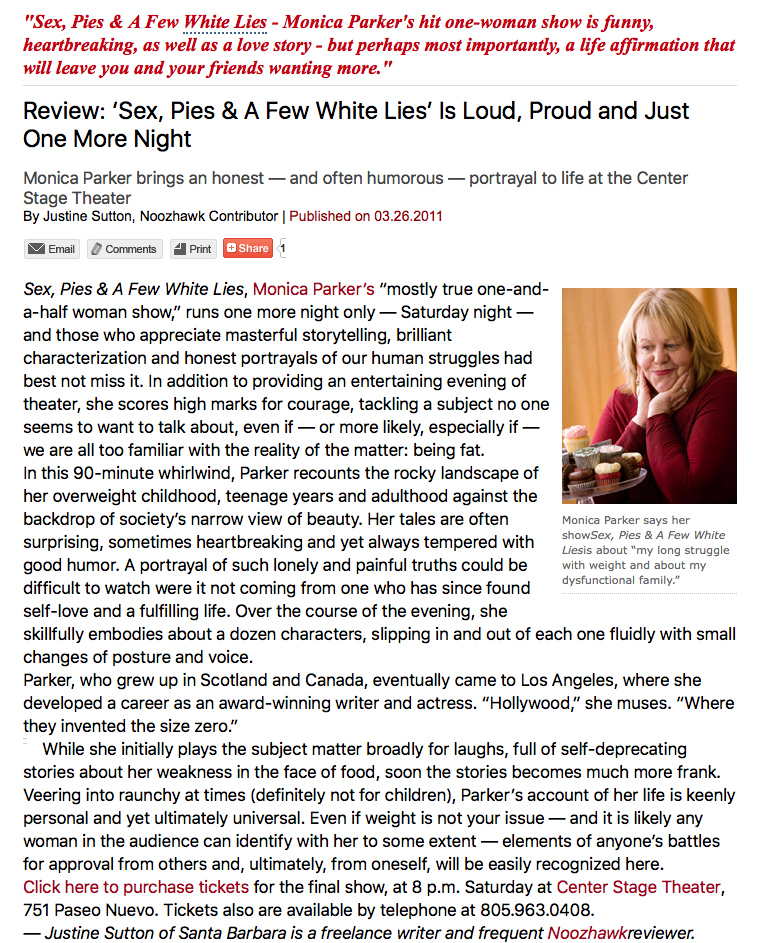