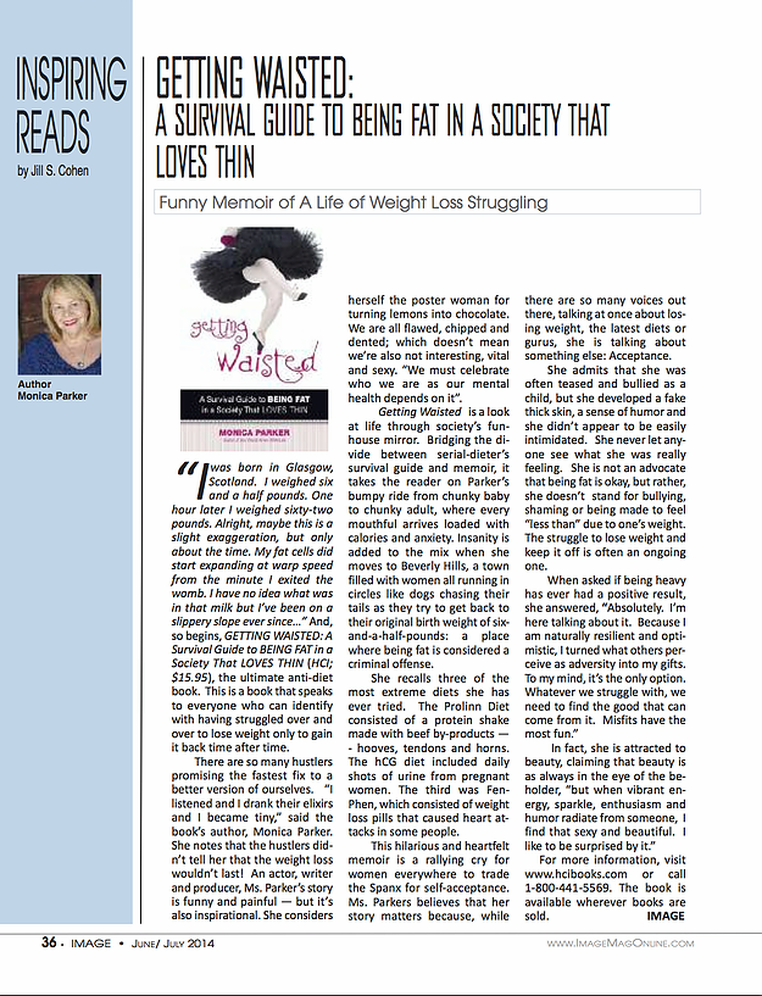 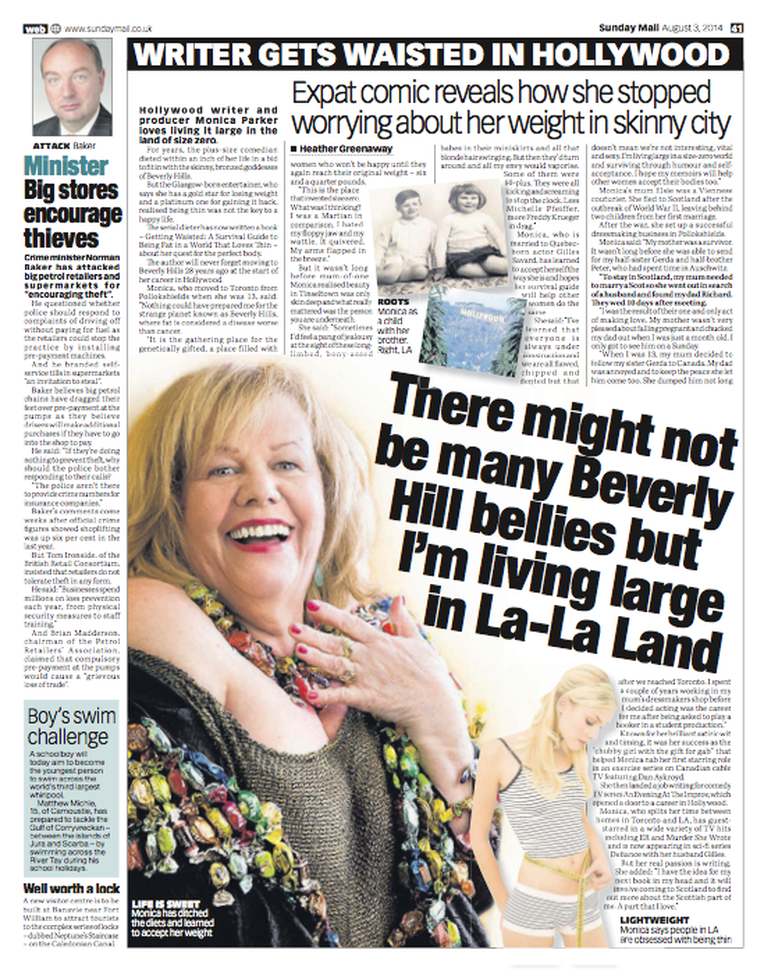 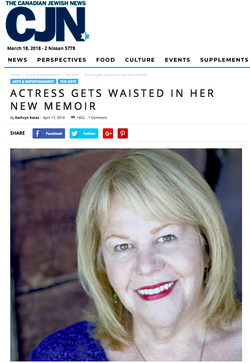 Getting Waisted is Monica Parker’s personal memoir, which takes a candid look into her life as a serial dieter.  Parker, an actress and writer, shares tales of growing from a chubby baby into a chunky adult with passion and wit in this book inspired by her one-woman stage show, Sex, Pies & a Few White Lies.

Parker moved back to Toronto from Los Angeles almost five years ago. “If I hadn’t come back to Toronto, I don’t think I would have written the play, because L.A. is a place of distraction, there is always things to do because it is nice outside. It is a town about business, so you are always off negotiating, hustling or doing something.

“When I came back here and faced that first winter in 28 years – I didn’t want to go out. I hadn’t really settled here, I was a new, old girl. I knew the city but it wasn’t in my personal GPS,” she said.   “I would stand at the kitchen sink and say how did this happen, but I wanted it to happen, I wanted to be here near my family.  But, still it wasn’t home, so I decided to sit down and write a show.”
The show was a success, and from this, the Scottish-born actress fell into a speaking career. Through that, people suggested that she write a book. Not daunted by the fact that she had never written one, she was up for the challenge.  Parker wrote a lengthy proposal, sent it out to three American agents, two of which wanted to represent her.

Parker says it was fun to rip open her guts and talk about everything that has been her life including her struggle with weight. “What I really got from this book was whatever challenges you are given in life, if you flip that on its head you really see those are the gifts you are given. I believe being a big woman has given me an amazing career, it has always separated me out from the pack.  It didn’t matter if I got older, I was always going to be a character actor. Being a writer has no age limit, but I also have all this experience of constantly being up against challenges and I know what to do. ”

She says that she doesn’t mind fat jokes, but doesn’t want them perpetrated on her. “I don’t mind saying things about myself, I find funny. I don’t feel that I am diminishing myself of anything, I feel it is a way of learning why we respond the way we do to things and a way of putting it out there so other people get comfortable.”

However, Parker said she does not like cruel humour. Parker said she respects honesty in humour and believes if you take pain in your life and put it into the light, then it has no power over you.

She hopes Getting Waisted inspires people to be more of who they are intended to be just as they are. To enjoy their lives and stop focusing on the negative and finding the positive in who they are.

“Being Jewish has given me my lifelong love of food,” admits Parker with a chuckle. “The activity known as a Jewish family dinner is volcanic.  Everyone has an opinion, and everyone says it, all at one time. I would say that has added value to my humour.”
Parker divides her time between Los Angeles and Toronto, where she continues to work in film and television. She was also the the co-writer of the film All Dogs Go to Heaven.
​
In addition to touring her one-woman show, Parker just completed two features films. She has a recurring role in Defiance on the Sci-Fi channel, alongside her husband, actor and fashion designer, Gilles Savard.

Hi everyone,
Hope you all had lovely weeks – what will you be reading this weekend?
I’ve been completely absorbed in Monica Parker’s Getting Waisted. I’ve read a lot of books about people’s struggle with food, but rarely from the perspective of someone who society does consider overweight. What I loved about Monica’s book is that, despite the comments and prejudices she faces, she doesn’t let herself become a victim. She makes a lot of jokes and is very self-aware that her issues with food don’t simply depend on what people think – she is very open about the deeper emotional issues which lead her to comfort eat.
I will admit that I didn’t believe some of the diets she tried – I actually did a quick google search and was horrified to find out they actually existed, that people would actually put their bodies through such torture simply to try and lose some weight, and that someone somewhere is actually selling these ideas. So I loved that Monica is completely open about the side effects she faced, highlighting how unhealthy some of the diets were – there’s one where she ate so much fruit it started fermenting inside her stomach. I mean… that’s definitely not healthy!
Some of the stories really shocked me, particularly when she recounts people’s pressure to make her thinner. For example, arriving in Canada to meet her aunt, she is subjected to intense scrutiny from her family, who are determined to make her lost weight. Of course this intense pressure has the opposite effect as she turns to food for comfort, and I found myself angry on her behalf that someone felt it was their ‘duty’ to ‘fix’ her body.
The book isn’t just about dieting and food. Monica underlines the way her relationship with food is interlinked with the events in her life – moments of joy, for example when she is pregnant and for once people are accepting that her body isn’t what they consider ‘thin’, to the loss of both of her parents, as she comes to terms with her childhood and family life. Her move to Hollywood was where she really blossomed, as she pursued her love of writing, deciding to define herself by her talent rather than appearance, in a challenging environment where everyone is chasing physical ‘perfection’.
Overall, I would recommend this book to anyone who has tried different diets – it definitely makes you appreciate that confidence comes from loving yourself, not letting yourself be defined by others.
Have a lovely weekend!
Julie xx